And the bees still buzz

This is my contribution to Artists Books 3.0(# 19) Nature. As I started looking at small creatures (medieval slugs, then butterflies, then bees) the words “And the bees still buzz” kept going round in my head.

Ryan Willams wrote this poem immediately after the attack at the Manchester Arena on 22 May 2017. (Worker bees have been a symbol of Manchester for hundreds of years). 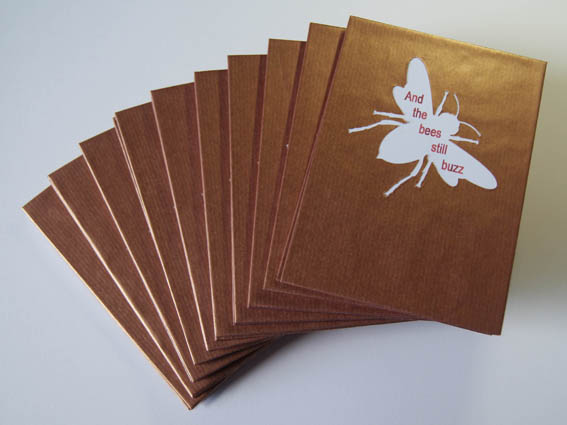 I live in Preston, not Manchester, but it’s nearby. My daughters lived there for a few years. They worked at the Manchester Royal Infirmary. My son works in the city centre. We regularly go to the City and the Whitworth Galleries, the John Ryland Library and the Exchange Theatre, I print in the studio at Hot Bed Press in Salford. It’s part of home. This book isn’t a comment on the politics of the situation or meant to point fingers of blame at any group. Like the poem I want it to reflect the response, the sorrow, the quiet anger and determination, the unity of a city made up of so many different people in the face of an attack on the way they choose to live and work alongside each other. I want it to reflect on the best of human nature in the face of wanton, senseless violence.

In my book the honey comb has been damaged but the bees are still there, coming together, moving to the damage to repair it. My bees are a uniform size because no one person or group is more important than the other. The differences between people and different groups, the thing that helps make the city interesting and vibrant, are alluded to in the differing sizes of the honeycomb cells

The whole poem reads:
“A grey Tuesday morning, 'neath Lancastrian skies
We wake once again to wipe tears from our eyes.
Forced to wear robes of weakness and pity,
As cowards attack the very heart of our city.

Like always, we'll comfort and hold one another,
A Mancunian family of sisters and brothers.
For a time our strut is reduced to a stagger,
But make no mistake, we'll rekindle our swagger.

We'll learn how to live with another deep scar.
If you think you can beat us, you don't know who we are!

We're Pankhurts and Turing, the Gallagher Brothers,
We're Morrissey, Marr and a million others!

We're a city of workers, a city of shirkers.
A city of tracksuits, and bibles and burkas.

We're each of us different but never alone.
In the Cosmopolitopia, we get to call 'home'.

So, come at us again, and again if you must.
Time after time we'll rise from the dust.
You'll never prevail - not against us...

This is Manchester, our MANCHESTER
And the bees still buzz!”
Posted by jac at 19:49