I've just finished my contribution to a project between the Lancashire County Archives and various local arts societies on the theme of Victorian Lancashire.  Preston Art Society decided to focus on the theme of cotton. I struggled to find a way into the project but eventually I became interested in letters written by two step brothers, Richard Taylor and Simon Brown to their father, George Taylor who lived in Burnley.


Originally the family came from Kettlewell in Yorkshire and were in the main tanners although Simon was a loom fitter and Richard a cotton spinner (my tenuous link to the cotton theme).
Both brothers were tried and convicted of theft. Simon for stealing a hat in Burnley and Richard for stealing 300 yards of cloth in Skipton  (Simon Brown was tried at Lancaster and was detained at Lancaster Castle, whilst Richard Taylor was tried at Pontefract and was imprisoned for a while at York Castle)

They were both sentenced to ten years imprisonment in Australia. They were transferred to the hulks to await transportation, Simon to HMS Warrior at Woolwich and Richard to HMS Fortitude at Chatham. Eventually Simon sailed for New South Wales on the Eden in July 1840 and Simon for Van Diemen’s Land on the Davis Clarke in June 1841, neither returned to England.

Richard was assigned to Sydney General Hospital and Simon to an estate called Lovely Banks in Springhill, Oatlands, Tasmania (the property of a Mr Bisdee)

Whilst working at the hospital Richard learned the trade of boot and shoe maker from a fellow convict and eventually set himself up in his own small property as a cobbler in Narellan. Simon rose from a ploughman and waggoner to overseer or foreman. His letters show that he much preferred working among sheep and cattle to working in the mills.

Both brothers married fellow convicts. Richard Taylor married Julia Hand who was a weaver before being transported (they had three children) and Simon married Margaret Martin who had been sentenced to seven years after stealing a watch in Liverpool.

As I was researching the brothers on the internet it struck me that what I was finding fascinating, whilst following from link to link, was actually an awful experience to have lived through. At a distance researching and learning about these events can be like a form of entertainment.

I decided that I could develop the iconography of my prints to explore this idea using imagery reminiscent of puppets and puppet shows (entertainment) to tell the stories of the two brothers. The stylisation of the larger figure reminded me of folk art/fairground figures which I thought was appropriate to the Victorian brief.

This is my interpretation of their stories 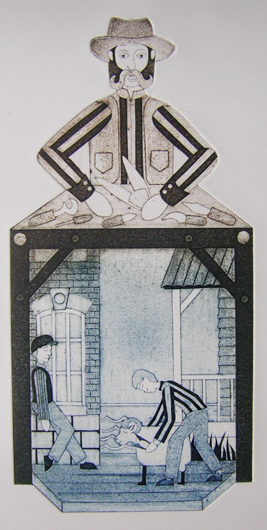 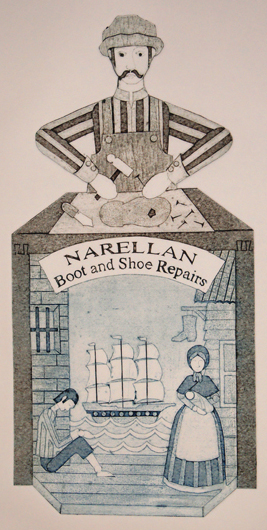 The information contained here was found on the following websites
http://www.convictrecords.com.au/convicts/taylor/simon/42966
http://www.lfhhs-pendleandburnley.org.uk/news-htm/news23.htm
and at the Lancashire County Archives
http://archivecat.lancashire.gov.uk/calmview/
Posted by jac at 16:29