One of the advantages of having a workroom in a spare bedroom is that you can roll out of bed and start to fiddle. On the other hand it can get to 4 o’clock in the afternoon and you realise you haven’t got dressed yet and there’s printing ink all the way down the front of your dressing gown.

This weekend I managed to finish two little books that should have been simple but for some reason I really struggled with.

The first one was in reponse to ‘Sea', the NWBA theme for the last two months’.  I decided to experiment using some small bottles (4cm tall) that I had in order to make 'A message in a bottle'. 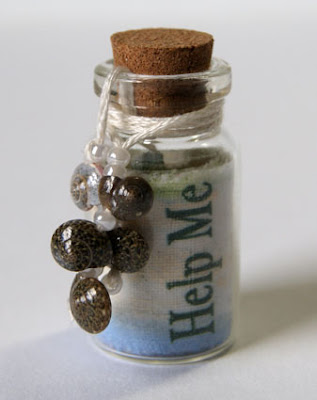 Inside the bottle is a gelli printed strip of fabric with text on both sides.

One side has the romantic notion of being shipwrecked

and the other what I suspect is closer to reality.

I had been intending to make an edition of these little bottles for sale at a low price at the Manchester Book Fair but struggled with them.  I have finally ended up with four, all made slightly differently. They won’t be going to the Book Fair but I’ve learned a lot from making them. 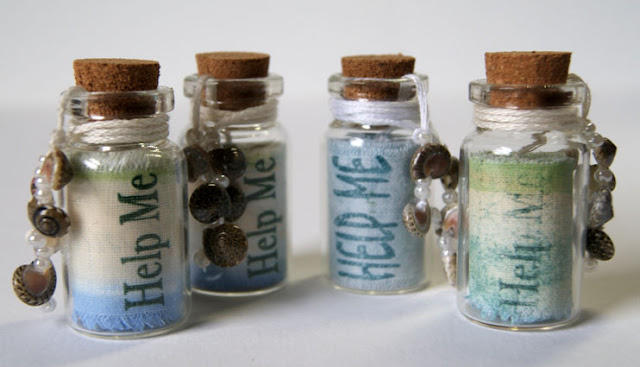 I’m pleased with the shell and beadwork but this was so fiddly and time consuming that it isn’t an option for a low cost edition. Also I’m not happy with the text. Gum arabic transfer wouldn’t play and I don’t like the feel of the inkjet iron on transfer paper that I eventually used.

I’ll probably come back to the idea and see what I can do with it in a couple of months.

The second book is the second in the Woodland series, also for a NWBA project. It also took disproportionately too much time from idea to finishing. Again that was down to time spent trying to get the right print method for the image and then making it work together with the text. Lots of learning and experimenting ended up in a very simple and small edition. 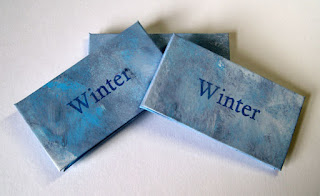