Its time to go back to work but this has been a productive Easter holiday.

I’ve rescued a chair (It was a 21st birthday present to my mum which makes it nearly 60 years old and it looked very much the worse for wear) and upholstered my rag box (which was inherited from my mother in law) to match. 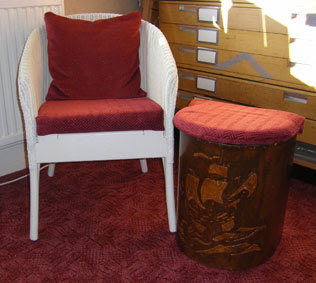 I’ve started to learn to weave (sounds very grand but I’m only using a simple frame loom) and had another go at trying to learn to knit.  No pictures of either of these. I’ve not produced anything worth sharing. Tapestry weaving  is something I’ll continue with. I’m really enjoying playing with colour and texture without having to ‘make something’. But knitting!  It’s one of those basic skills that I feel I ought to be able to master and every now and then I have another go. I think its back to the bottom of the cupboard for now for the needles.


On the book front Rapunzel has moved again (I wouldn’t say it’s made progress, more gone sideways, but I’ve been busy with it). I decided to push the long thin concertina format for the time being which meant looking at the composition again. Not only did it have to fit the format but it also had to make sense as separate panels as well as one large image.

The collagraph plate still didn’t work for this so I started to play with extending the composition. In the meantime it has changed from simple silhouettes to a more detailed image. It started to make me think of a cross between woodcut chapbooks and Victorian illustration, especially Morris and Beardsley.

The Victorian influence fitted in well with the inspiration from Castell Coch and I enjoyed bringing in references to that type of painted imitation wall tile decoration in the space between the two women. The motif is based on hawthorn – a plant that is said to have protective qualities and comes in a variety with seven petals. Seven being a magic number I thought this was apt for the witch’s interior decoration.

The strong white dark contrast should also make it easy for Xerox lithography, or so I thought.

Problem number one – Staples have changed their photocopier. The copies from this one aren’t as good to print from as the old one.  Problem solved by using the ancient (if expensive) machine at the corner shop.

Problem number two – the large areas of black just aren’t printing well and though I like the worn look for other purposes they make it difficult to read this image. I think It may also be difficult to produce a uniform edition with such large photocopies.

Problem number three – although the copies are large for this process (and my press) they are only A3. This is making the size of the book, when the image is folded into eleven panels, feel a little on the mean side

On the positive side with the Xerox litho, I did print copies of the collagraph plate. I don’t want to use it for Rapunzel but I think there are possibilities here that I want to explore for ‘Where the dead live’

I have decided to try working in relief print for Rapunzel, lino rather than wood, which means I can scale up the block. I'll have to loose the hawthorne motif - far too complcated for my cutting skills, but on reflection when I've seen it printed it looks a bit too busy for the rest of the image anyway. So far I’ve only tried a test cutting piece and still have to print it. 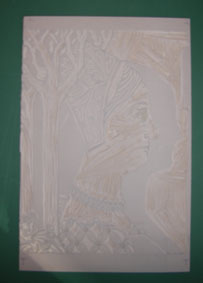 Printing may have to wait a while. Next weekend I’m off to the Hot Bed Press in Salford to a  Japanese Woodcut Course - a much appreciated Christmas present from my kids.