I've been thinking some more about 'Where the dead live'.

Initially, for people, I think it's in the memory of those that knew them. But, when they've also gone, it has to be in something tangible that has been left behind. Something that anyone could come across that might provoke thoughts about this person..

This could be a gravestone, an inscription, a line in a document, an artifact, anything that makes you think about this person, reminds someone who never knew them that they were once here.

But I've also been looking at the stuff on the top of my plan chest. Amongst the junk there's a collection of seed heads, some of which are still loosing little black seeds every time they get knocked. The idea of latent life in the dead plants also intrugues me. 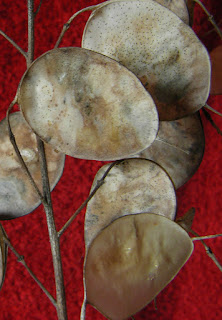 Looking closer at the Honesty. Most of the ovals are the shiny inner section of the pod but there are a few remaining intact heads. A couple of these are begining to split. The way the two outer layers peel away from the silky inner layer reminds me of a book. I'd like to explore this further.
Posted by jac at 14:58