Not quite the day at the press that I had promised myself. I haven’t got an image prepared yet so a trip to Salford seemed a bit of a waste of petrol.

However I did get ink onto paper. Yesterday I think I may have agreed to give a demonstration/workshop session at the Art Society. It won’t be until next year but I thought I should make sure that what I thought I would do was at least possible

I want to get people making collagraphs but for that
I need a portable press. I vaguely remembered someone somewhere mentioning using a pasta maker.

I thought today I’d better have a play and see if I can make it work. I also need to keep costs down, so using recycled materials as much as possible is the idea. And it’s only a two hour session, including tea break, so clean up needs to be fast and easy.

The plate and ‘press bed’ has to be flexible to pass through the pasta maker. I thought I could use a laminated postcard (used teaching resources) for the press bed and an old (as in destined for the bin not as in antique) photograph for the plate.

I cut and stuck shapes onto the photo using masking tape, magic tape and sellotape, overlapping some elements, and I scored the card with a scalpel to give an incised line. I wasn’t bothered about the design I just wanted to see if it would work. I inked up using scrap card and Calligo safewash ink and wiped using newspaper (no scrim to keep costs down). 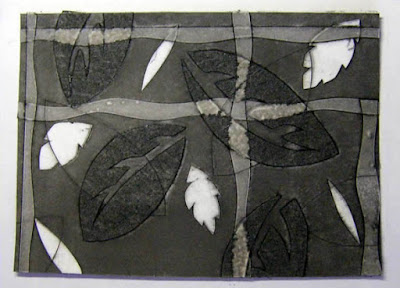 I made a stack of the laminated postcard, a sheet of scrap paper, the plate and damp cartridge paper, and wrapped tissue round it to help it hold together in the ‘press’.  I laid two layers of craft felt on top and carefully fed the whole thing through the press. 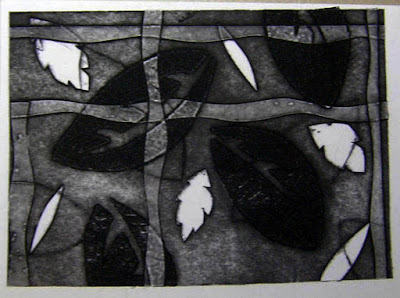 I re inked and tried Number 3 for the next one, the background isn’t as dark but it seems to have printed ok 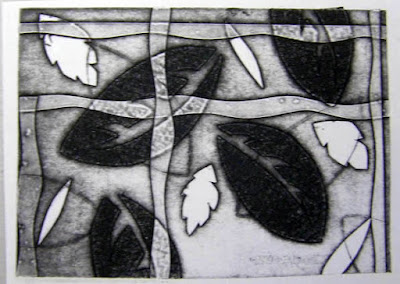 I had meant to use the shiny photo side to get a white background but stuck the first shapes on the back by mistake. It has a satin finish and has printed as grey which I quite like.

Now I’ve established that it will work as a press I need to put some real thought into the image making.
Posted by jac at 19:48