I can’t believe it has been so long since I posted anything.  This is going to be longer than normal just to catch up.


I put my name down to do two titiles for the 4th edition of BOA. I had originally intended to try and do each edition in 6 months. I think I overestimated what I could achieve whilst working full time hours, but next academic year it looks like I’ll be going back to part time so I’m giving myself an extension on the first book (my ‘deadline’ is now the end of August) and aiming to finish the second one by the end of  December!

Rapunzel
This is ticking over but I decided that the image wasn’t balanced and needed expanding. The separation between the prince and the girl wasn’t large enough but putting in an extra piece here means adding one elsewhere. (I want to have a part of the image visible when the cover is opened so this means an odd number of panels to concertina into the binding)

I also decided that I wanted a visible difference between the opulence of the inside of the tower and the woods/brambles outside. Making the extra panel here meant that the window could be bigger (I wasn’t happy with the size of small arched shape I had before) and I could experiment with ‘wallpaper’ patterns. I wanted a Victorian medieval feel, influenced by the design of Burgess at Castel Coch but it also need to be simple enough not to overpower the rest of the image. I decided on a repeat based on the bramble structure from the forest, taming the wildness of the outside to emphasise the safety of the inside.

I’ve also decided to go back to my original idea of using photocopy litho printing for the image. Having tried lino, considered wood, having looked at the earlier experiments I’ve decided that I prefer the older worn look of the dark areas in this method to the solid blocks of the relief print. Also the fine lines are just too much for my cutting skills; on the trial piece they look too crude. Having added the two panels the image has now grown to the point that it will have to be made out of two blocks because of the limitations of my press size. I think I’ve convinced myself that making a join from a scanned master may be easier in the long run than carving it.

These changes have been stitched together on Photoshop and I am happier with the overall composition but whilst Photoshop and scanners are ok for working out the composition the joins between the old and the new are too apparent to use it as the master for the photocopies. This means back to the drawing board (or light box) and drawing up a new master with ink not digits– more scope to change my mind again!

‘Paying it forward’
In response to the ink drying issues I’m trying new techniques but it is progressing slowly and I’m hoping to get this finished in the next two weeks. I’ll post images of it then.

Holidays
Last week was half term and we’ve just returned from a week in the Orkneys (a small group of islands ninety minutes sail away from the top of Scotland).

We stayed in a place called Harbour View, and it really was. Any closer and we’d have been in the water.
See the view from the window! 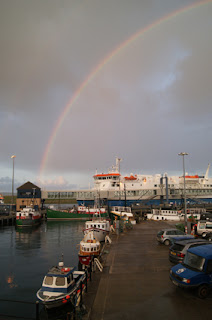 There’s a fantastic small gallery less than a minutes’ walk away, The Pier Arts Centre, that just happened to have a print exhibition on.  I spent several happy hours over the course of the week with my nose against the glass trying to work out ‘how did they do that?’

The weather wasn’t good enough to sit out and draw, although in the main it was better than most of the rest of the country but I’ve got loads of photos and a whole stack of ideas to be going on with. 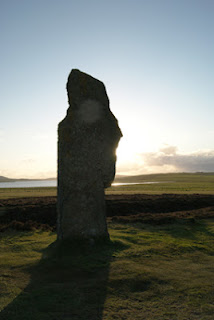 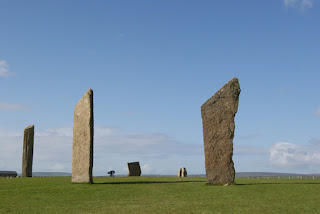