After all the hard work from cast and crew the final performance of Babes in the Wood was last night. This means I have no more excuses; I need to get on with Reflections and with some new prints.

I made a mock up for the tunnel book 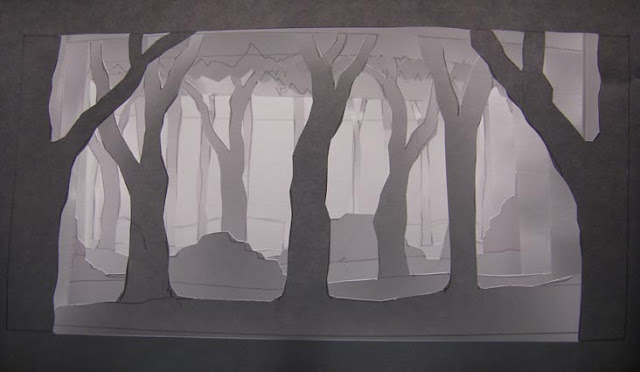 And tried making the pieces using gelli printing for texture 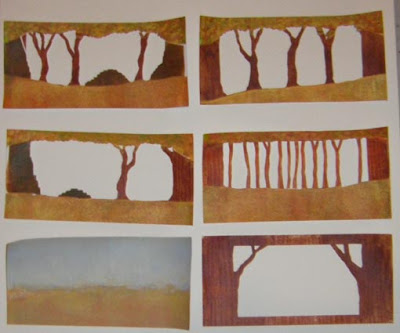 And overlaid them to see how it worked 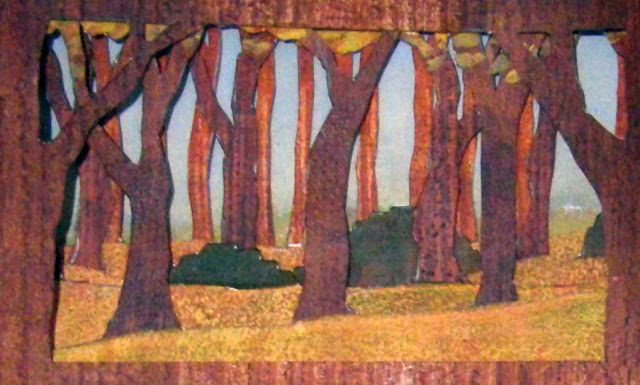 I’ve come to the conclusion that I need to include more of the tree foliage, that the card stock I used was too thin and that I might be better off painting rather than printing the colour.

I think I'd quite like to do it as collagraph but there isn't time
Posted by jac at 17:30 No comments:

I finished the rough sketches from the woods walk photos this week and even got as far as starting to monoprint.

Because it’s panto time again (appropriately enough its Babes in the Wood this year) It has taken longer than I’d have liked to get this far. So much time has been taken up painting backdrops and making props. The dress rehearsal was yesterday and this week sees the final rehearsal and performances on Thursday, Friday and Saturday.

Yesterday I realised there was no way I could get the prints finished, dried and made into the book I wanted by the beginning of December in time for the NWBC meeting. So I’ve started rethinking. Fiddling with ideas lead me to tunnel books and star books. 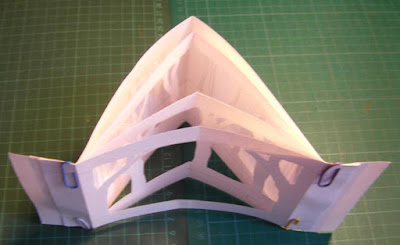 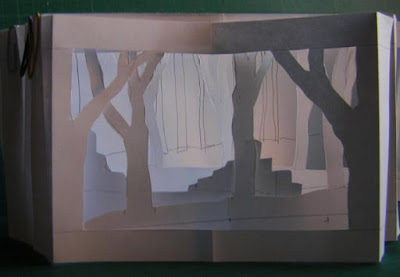 I still want to incorporate the idea of the farms now hidden underneath the woodland. If I want colour I’m going to have to use acrylic paint rather than oil based inks.To see if these ideas are feasible I need to bite the bullet and start painting.
Posted by jac at 18:02 No comments:

Nothing much to see this week, it’s all preliminary work for the ‘Reflections’ book.

I’m trying to learn from the course I went on in October so rather than making one or two tight preliminary drawings with a fixed idea of where I’m going I’m trying out making a larger series of looser quick sketches on scrap paper based on the photos I took on our trip to the woods. In theory I’ll then explore the more promising ones with monoprint. This is the first half. 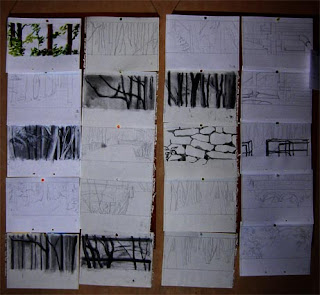 One of the things I need to work on is colour. In my work, if it’s not monochrome, it tends to be a bit hit and miss and often ends up rather garish. As a step in the right direction, hopefully, I’ve started by making colour samples with mixes of the printing inks I’m currently using. 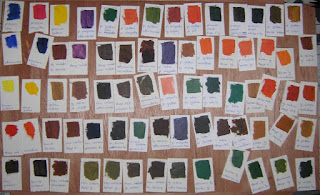 I should finish the drawings this weekend. I'm looking forward to taking some of them into colour.
Posted by jac at 00:48 No comments:

A Walk in the Woods

For the October meeting some members of the members of the NWBC met up at Harrocks Wood in Irby. Those of us who couldn’t make it to Irby have visited our own special woodland places.

The idea is to respond and produce 'REFLECTION’, a folding book, for the December meeting
I was on a course at HPB that weekend so my visit to the woods took place last week. It was half term so we had a family trip, three generations.

My woods are Brinscall Woods. I grew up in Brinscall and we played in the woods as kids. It seemed to us that they had always been there. It was only recently that I read a book ‘The farms of Brinscall Moor’ and realised that the place we played in used to be farmland which was only forested in the early 20th century.

We knew about the ruins of the big house, Heatherlea, which still had some intact walls with window openings when we were little (much of it has fallen now). But the rest of the walls which ran through the wood we just accepted as being there and didn’t give them much thought.

I want to use some of the techniques we experimented with on the October HBP course for this book and to base the prints on the photos I took on my visit in October. I also want to combine these prints with sections of 19th century maps of the route we walked and add reference to the people who used to live in these farms.

I’ve done a mock up and at the moment I’m thinking of a blizzard book.

That’s the plan but I’ll see what happens

These are the first monoprints, just experimenting with technique.