I had a set of photos of the Lewis Chessmen that I'd taken several years ago and meant to do something with. I thought they would work as a starting point.

I've been drawing individual pieces trying to get a feel for the style and detail (I've noticed I do tend to gravitate towards linear work) and have started experimenting with mixed media,trying to get away from a single figure suspended in space.

I'm taking words from Caxton's 'The game and playe of chesse'. 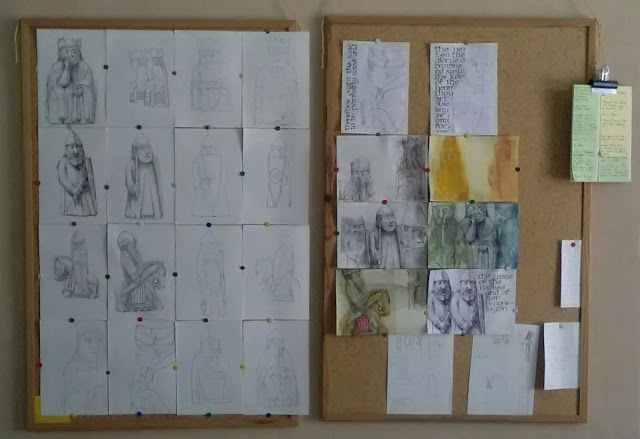 It's moving slowly, I'm going through a phase where I'm finding it difficult to get motivated, but it is progressing.
Posted by jac at 14:07 No comments:

This is a wordy post while I reset what I’m doing, so apologies in advance.

I’m sure everybody gets them. The project that just won’t gel, that you really aren’t enjoying.
Mine at the moment is ‘Break’. I’ve thought about embossing and collagraph, I’ve tried drypoint and monoprint (not good - I’m not showing the results). I can’t make the artwork and then digitally print because it needs to be lined up perfectly on both sides of the paper and I can’t make my printer do that accurately.

Sometimes you just have to give up and move on.

And deciding to do that made me consider the rest of the work I was struggling with.

I think part of the problem is that at the beginning of this new normal I grabbed at loads of projects to keep myself busy. Deadlines made me go and do in the studio (I’ve upgraded the back bedroom!).

The trouble is I’ve started to work back to front. Grabbing at a theme or title, deciding on a structure and how an end product should look and just heading straight for it. For some things this works but as a general way of working it has left me feeling stale and uninspired.

So I’ve decided I need to slow down, play and explore materials and imagery more, and let the artwork dictate what the end product will be. I also need to select and set manageable goals for some of the things I had lined up and let the rest go. I’ve chosen four.

I’ll carry on with ‘Isolation,’ eventually, although it is suffering from the same problem as ‘Break’. I’ll leave it alone for a week or two and then I’ll rethink but I’m considering the idea of the medieval garden, an enclosed place of beauty, order and sanctuary surrounded by the wildness of the surrounding forest.

‘Making your mark’ is a long term project aimed at a group popup exhibition when gatherings are allowed.  I think I’m going to go back to the idea of the theatre, responding loosely to the work of Laura Knight, for this. But for the time being I’m going to settle for selecting a sensible number of photos, from the very many we’ve collected of drama group productions, that I can use for reference material.

‘An inch a mile’, a NWBA group project, needs blocking out to show when the ships were at sea, by various coasts or on land, so that’s some rereading of notes and stitching markers onto the rolls of fabric for later use. That will make a good counterpoint to the exploratory play that I want to do.

And the final project I’m going to carry on with is ‘Collect’. This is the one to start experimenting with. I’m going to use museum collections as a springboard (though it might morph into working from collections of objects from round the house if I want to work from life). I have images that I’ve taken over the years in various museums that I can work from. At least if I can’t go out it’s a good excuse for working from photos.

I’ve been reading Shelly Rhodes Sketchbook Explorations which has inspired me, although I won’t actually be using a sketchbook. I find new books inhibiting and a book with a few good pieces in it even more so. I also like to spread things out and be able to see different things side by side as they develop. But I will begin by working on standard sized paper (I’m starting on A5) with a view to possibly binding them after the fact. I’ll give myself a fortnight to focus mainly on this project and then see where I am. 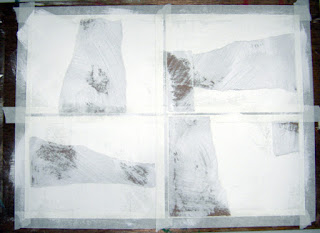 Not much to show

I've been playing with ideas this week so some research and a lot of pondering. A lot of scribbles and rough notes but not much that's visually interesting.

Revisiting old panto photos as a possible way into 'Making your mark' since we don't have rehearsals at the moment.

Trying to make drawings for 'Break' and get away from the idea of embossing the image.

Thinking about 'Isolation'. I like the structure l've come up with but it needs printing on both sides of the paper which ideally also needs to be about 60cm long. I can't do that at home. And I don't want to join shorter sections because it will make the whole thing very bulky (and push me over into parcel post rates when I send it out). 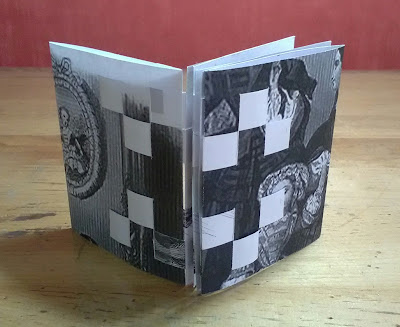 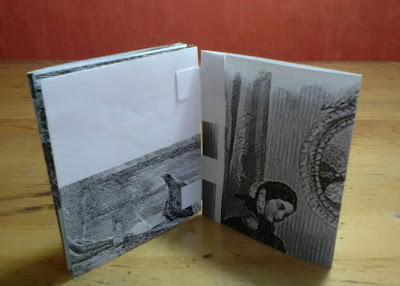 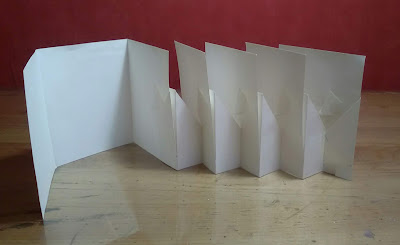 Not so far, but I have learned two new forms that I want to use in the future.
Posted by jac at 13:29 1 comment:

I started work on two new books this week. One is for are the ‘you book enough’ challenge. This month’s theme is ‘Break’. I wasn’t going to do one this month but while I was fiddling with ideas for the other book I had an idea. 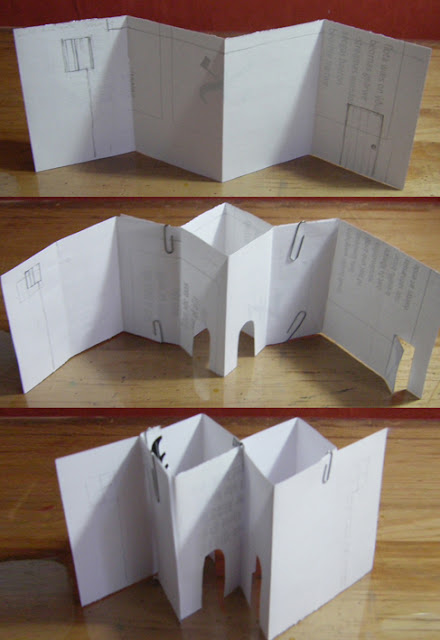 ‘Break in/Breakout’ a sort of dos a dos book. Unfortunately at the moment I envisage it bound in white leather with gold tooling and heavy embossed paper on the inside. This isn’t going to happen.  I haven’t got the skills. A less sumptuous version hopefully will eventually arrive.

The other book is for Artists Collaborative Book 3.0 #22 Isolation. I fiddled with various sizes and arrangements of cells and the final mock up with the figure just arrived. 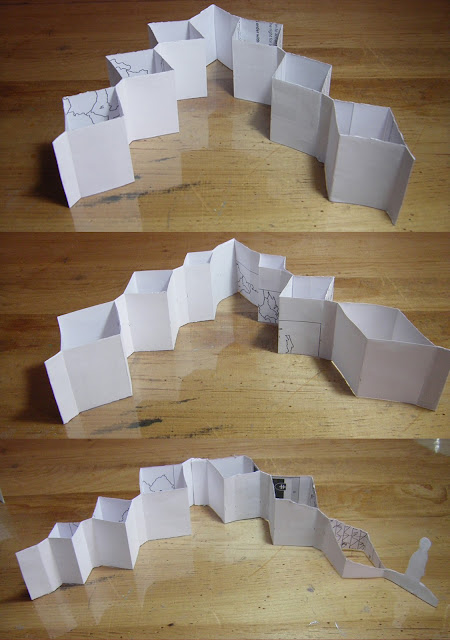 Usually I have some idea of how I want a book to look when I get to this stage but I’m not sure at all with this one. I’ll experiment and see what happens. At the moment, because the paper needs to be double sided, I’m thinking monoprint. 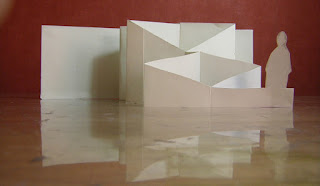 But here is another complication. Normally for a concertina like this I’d  print the pieces in two sheets but I can’t get to Hot Bed at the moment and my press at home is only small so I’m going to have to consider joins which makes the inking/construction more difficult.
And it also has to be editioned.  I usually do about 10 for this group so I need to keep the process fairly streamlined.
Posted by jac at 11:48 2 comments: